Godt skrevet fra Gawker, og isteden for at jeg skriver noe tilsvarende mener jeg dette er viktig å tenke på – derfor klipper jeg bare en del rett ut fra artikkelen:
——————————————————————————————————————
In the days after Steve Jobs’ death, friends and colleagues have, in customary fashion, been sharing their fondest memories of the Apple co-founder. He’s been hailed as “a genius” and “the greatest CEO of his generation” by pundits and tech journalists. But a great man’s reputation can withstand a full accounting. And, truth be told, Jobs could be terrible to people, and his impact on the world was not uniformly positive.

The internet allowed people around the world to express themselves more freely and more easily. With the App Store, Apple reversed that progress. The iPhone and iPad constitute the most popular platform for handheld computerizing in America, key venues for media and software. But to put anything on the devices, you need Apple’s permission. And the company wields its power aggressively.

Apple’s devices have connected us to a world of information. But they don’t permit a full expression of ideas. Indeed, the people Apple supposedly serves — “the misfits, the rebels, the troublemakers” — have been particularly put out by Jobs’ lockdown. That America’s most admired company has followed such an un-American path, and imposed centralized restrictions typical of the companies it once mocked, is deeply disturbing.

But then Jobs never seemed comfortable with the idea of fully empowered workers or a truly free press. Inside Apple, there is a culture of fear and control around communication; Apple’s “Worldwide Loyalty Team” specializes in hunting down leakers, confiscating mobile phones and searching computers. 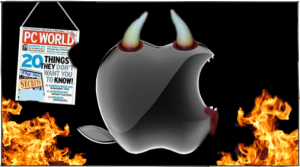 Apple applies coercive tactics to the press, as well. Its first response to stories it doesn’t like is typically manipulation and badgering, for example, threatening to withhold access to events and executives. Next, it might leak a contradictory story.

But Apple doesn’t stop there. It has a fearsome legal team that is not above annihilating smaller prey. In 2005, for example, the company sued 19-year-old blogger Nick Ciarelli for correctly reporting, prior to launch, the existence of the Mac Mini. The company did not back down until Ciarelli agreed to close his blog ThinkSecret forever. Last year, after our sister blog Gizmodo ran a video of a prototype iPhone 4, Apple complained to law enforcement, who promptly raided an editor’s home.

And just last month, in the creepiest example of Apple’s fascist tendencies, two of Apple’s private security agents searched the home of a San Francisco man and threatened him and his family with immigration trouble as part of an scramble for a missing iPhone prototype. The man said the security agents were accompanied by plainclothes police and did not identify themselves as private citizens, lending the impression they were law enforcement officers.

Steve Jobs created many beautiful objects. He made digital devices more elegant and easier to use. He made a lot of money for Apple Inc. after people wrote it off for dead. He will undoubtedly serve as a role model for generations of entrepreneurs and business leaders. Whether that’s a good thing or a bad thing depends on how honestly his life is appraised.